We love our house, and we have loved living in our house. I am not a believer in “forever homes,” because life is just too unpredictable and I am too restless. This was the right house at the right time for our family. But now we’ve been presented with an opportunity to move to a house that needs our creative energy (and our dollars, natch).

We bought this home almost exactly five years ago, on May 27, 2011. If you know me at all, you know that on June 30, 2011, one month after our closing, the house was struck by lightning and suffered massive fire/water damage. Jason likes to say that his “honey do” list went from 1,000 items to 5, because after that almost everything in the house was brand-new.

Despite the total renovation, we have continued to make changes and improvements – well, we see them as improvements. I thought it would be fun (for me) to look back to where we started, and compare it to the house we’re leaving behind.

We haven’t changed much about the exterior – but we did add a Bevolo gas lamp to the front porch. It remains one of my favorite things we did during the remodel. 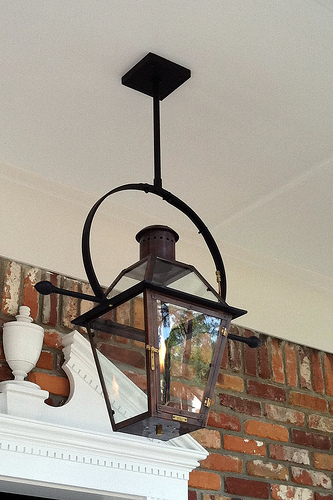 We also chose a lighter roof color, to reflect more sunlight, and replaced the windows with energy-efficient models.

The other big change we made to the home’s exterior was replacing the flat roof over the sunroom with a gable roof, which allowed the space to be properly heated and cooled.

The picture of the pool reminds me – I need to soak up as much pool time as I can before we move!