When I first heard about #DryJanuary last year, I rolled my eyes. Oh, boy. Like we need another ascetic competition, along the lines of swearing off gluten for non-medical reasons, or replacing white sugar with tears.

I have never understood people who consciously make a choice to do X, then complain incessantly about doing X. “I’m going to the gym! Sweating is horrible!” “I gave up cheese for Lent! I’m miserable!” If your frivolous choice actually leads to misery, MAKE A DIFFERENT CHOICE.

As you know, the last year has been particularly stressful, and by December I became concerned about my drinking. I looked forward to having a glass of wine in the evening – but was I too eager for it? I had a drink almost every night – was that too frequently? I wasn’t terribly concerned about the amount of alcohol I was drinking, but I was a little worried that it was becoming too habitual. When the clock struck 6, I was like Pavlov’s alcoholic dog.

This January, Jason and I decided to take a real break from drinking. I told exactly one person about it, because of the reasons set forth in paragraph 2 above. I thought it would be a good chance for me to evaluate my relationship with alcohol. Secretly, I also hoped to lose five pounds and sleep better at night.

It’s been almost three weeks. I haven’t lost a pound, and I’m not sleeping any better. My skin didn’t magically clear up, either. But on the plus side, I don’t think a single person noticed – even the kids were surprised when I told them this morning.

Not drinking has been surprisingly easy. In the evenings I fix a tonic water with lime, or a cup of tea, just to get a break from water (which I drink all day). I was never really tempted to swan-dive off the wagon, and all our alcohol stayed in plain sight. I didn’t have a problem attending events where other people were drinking.

To celebrate our temporary sobriety, we re-did our wet bar last weekend.

When we bought our house, we envisioned using the sunroom as a place for the kids to hang out. But now, nearly five years after moving in, we’ve decided to repurpose the room as an office/creative space for Jason and me. And nothing says “work” or “crafts” like an awesome wet bar.

This is what the area looked like when we bought the house:

It was a functional space, but it didn’t thrill us. Here’s why:

We decided to paint the lower cabinet, fabricate a new counter top, and replace the upper cabinet with open shelves. Oh, and not spend a lot of dollars doing it.

We think it turned out fantastic.

First, we primed the cabinet box, drawer fronts and doors with Zinsser’s Cover Stain Primer, then painted them a pale blue-green we already had on hand. Jason constructed the counter top out of 1×4 boards, glued with construction adhesive to a thin sheet of plywood. The counter top is edged in 1×2 boards.

The upper shelves are 1×12 boards, and we made shelf supports out of plumbing supplies – 1/2″ flanges, 1/2 x 12 pipe nipples, and 1/2 caps. Each one is screwed into a stud for maximum stability and capacity.

We stained all the wood with some Bombay Mahogany left over from our bed, but I tried a new technique. I wanted the wood to look somewhat aged and distressed, without looking like something I just pulled out of a dumpster. Jason brushed the stain on, and I counted to five and wiped it off. Perfect. We sealed the shelves with one coat of satin-finish polyurethane, and put about five coats on the counter top.

I love the way the paint, wood, and brick go together:

This project cost right around $230. The priciest bit was the materials for the shelf supports – each one was $14, and we used eight. However, I could not find anything similar for less money online, and I adore the way they turned out.

I think we’ll be putting an end to our dry January in the next few days. I am relieved that it was such a non-event.

Cocktail of the Month: July

You thought I’d forgotten, didn’t you? Or perhaps that I got carried away in the testing phase of a new cocktail recipe?

I have searched the internet, and I can’t find evidence that this drink has a name.

While I’m trying to come up with something clever, you should go make yourself one. As with last month’s margaritas, please be sure to use small glasses.

What should we call this? The flavor can best be described as classy – cool and clean. The St. Germain takes the edge off the gin without making the drink overtly sweet. The drink’s preparation is straightforward – while researching this drink, I found variations that included making one’s own cucumber water, muddling mint leaves, and other fussy tasks. This can be ready to go in just a few minutes.

I think we should call it the Dowager Countess.

Cocktail of the Month: June

Margaritas will always be near and dear to my heart, because they played a guest-starring role in one of our favorite honeymoon adventures. Jason and I went to Cabo San Lucas for our honeymoon, and one night we decided to order a pitcher of margaritas with dinner at a local restaurant. The pitcher came with two very small glasses, which I thought odd. We quickly realized that these margaritas were authentic, i.e., super strong. No margarita mix involved. But we’d paid for the whole pitcher, and by God, we were going to drink the whole pitcher.

We took a cab back to the hotel that night.

Step one for making delicious margaritas is: throw away your bottle of fluorescent green margarita mix. You don’t need it!

You will need: Tequila, Cointreau (or Triple Sec), Lime Juice, and Simple Syrup.

First off, mix together some lime juice and simple syrup. I like about 2/3 juice to 1/3 syrup, but it’s up to you. If you like a sweeter drink, add more syrup. If you like to pucker, add less.

Probably a good idea to mix up a pitcher right now. Just make sure to serve it in small glasses. 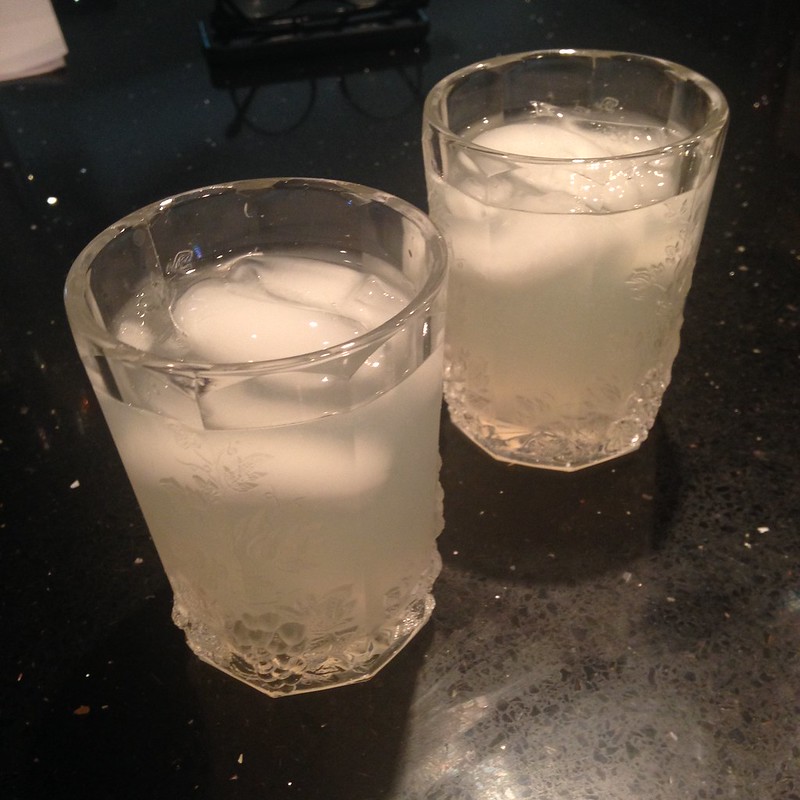 Cocktail of the Month: May

Add a lot of crushed ice to a tall glass. Fill it 1/3 of the way with Tanqueray. Top with Publix diet tonic water, preferably bought on sale. Add a squeeze of lime, or a squeeze of bottled lime juice in a pinch. Drink while watching a sporting event.

Fill a tall glass halfway with cubed ice. Add 1-2 oz. of Hendrick’s Gin. Top with Schwepps diet tonic water. Add slices of cucumber. Drink while fixing dinner, or by the pool. (For pool consumption, it is recommended that one use a Tervis tumbler instead of a glass. Safety first!) 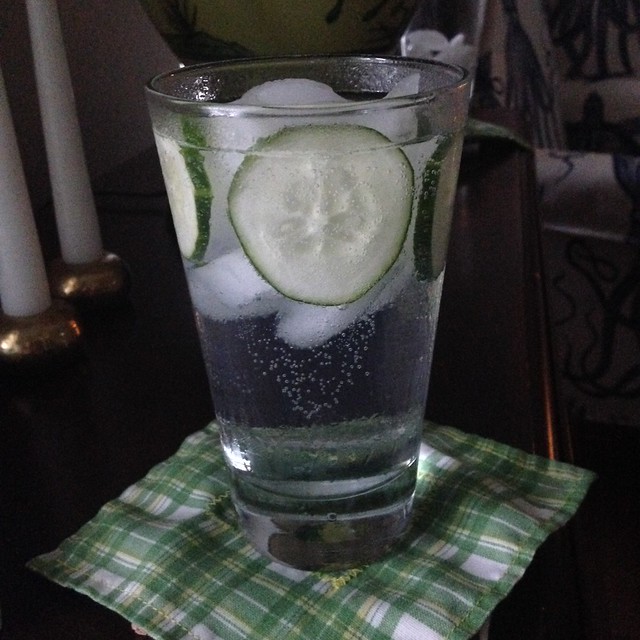 Cocktail of the Month: April

This month, I decided to do something crazy.

I made up a drink. Out of thin air.

I mean, let’s face it, there probably aren’t many alcohol combinations that have not been attempted by intrepid mixologists (or idiot college students) at one point or another. However, I could not find record of this particular combination as a popular drink.

It was a Friday evening. I was not interested in going to the liquor store to buy anything, so I looked at what I had on hand. The kids wanted to get in the pool, so we were looking for something on the light/refreshing end of the drink spectrum.

Over in the fruit bowl, a grapefruit called to me.

I squeezed the grapefruit, which yielded about a cup of juice. I added an equal amount of gin, and then sweetened the mixture with a few tablespoons of rosemary simple syrup.

And lo, it was very good.

The grapefruit was a good match for the herbal simple syrup, and the gin added a nice depth of flavor without making the drink heavy.

We’ll call it The Chicken.

Cocktail of the Month: the Fitzgerald

Is there any phrase more evocative than “forgotten gin cocktail”?

While in Charleston, we visited High Wire Distilling Company and sampled their excellent gin. We discussed our favorite gin cocktails, and the bartender/distiller mentioned a Fitzgerald, which was new to me. He said it involved gin, lemon juice, simple syrup, and bitters, and I was sold. Clearly we’d found March’s cocktail of the month.

The Fitzgerald doesn’t have a Wikipedia entry (someone should get on that, stat), but I found reference to it in this article on Forgotten Gin Cocktails from The Kitchn. It’s a pre-Prohibition cocktail, a variation on a gin sour. The recipe varies based on source, but I liked the following ratio: 2 parts gin, 3/4 part lemon juice, 3/4 part simple syrup, and 2 dashes bitters. If you make your own sour mix, it would be 2 parts gin, 1.5 parts sour mix, and 2 dashes bitters. We garnished with a lemon peel.

It tastes like the Great Gatsby. I can’t think of a better way to describe it. I want to drink it while lounging in a flapper dress. The bitters make it more sophisticated than a simple sour, but it’s not an inaccessible or fussy drink. It would make a perfect (and unique) pre-mixed drink for summer parties.