Week 3 got off to a slow start. The subfloor was 90% finished, but we were waiting on the HVAC crew to reroute duct work and cut new holes for floor vents, so all floor work was put on hold until that happened. Since the walls were about 50% opened up, we decided to add insulation to those portions. Every little bit helps!

On Thursday morning, the drywall crew descended. In one day, they’d turned the kitchen from this:

In addition to replacing the missing drywall, they smoothed out the heavy texture on the remaining walls and ceiling. Now they are like butter.

Monday morning, the HVAC guys arrived to do their thing, which took all of two hours. Since then, not much has happened. The tile setters should start putting the floor down later this week, and the cabinet guys have been sending pictures of the cabinets in progress.

We’re surviving well. I am working my way through a backlog of freezer meals, and I’m grocery shopping in the old style – buying just what is needed for a day or two, with no leftover ingredients.

If Week 1 was all about flooring, Week 2 has been all about….flooring.

The biggest project this week has been the sistering of all the joists. From one corner of the kitchen to the other, there is a significant difference in elevation. By attaching a second joist to the existing joists, you can subtly raise the floor in the low corner to ameliorate the slope. It takes a lot of time to do properly, and a lot of laser-leveling.

You can see this here – the old joists are dark, and the sistered ones are lighter.

Once that incredibly tedious process was complete, it was time for another curveball! Of course!

One evening when Tyler got in the shower, I happened to be in the kitchen when I heard a sound that strikes fear in the heart of every homeowner: water in the wrong place.

Turn up the volume and get out a handkerchief. 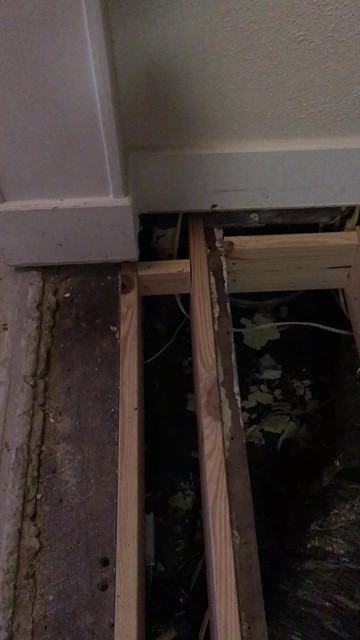 When the house was being jacked up to install adequate support, sections of the cast-iron waste pipe from the upstairs hall bathroom separated at the lead seal, and every time that bathroom was used, water (and…..stuff) poured onto the ground under the house.

NOT GOOD. Not good at all.

We discovered the problem on Thursday night, and it was fixed by Monday morning, so it could have been much, much worse.

The subfloor began to go down late last week, and that was mostly finished on Monday, just in time for the electrician to show up and begin roughing in outlets and 220 lines and adding space for additional light fixtures.

Monday also saw a visit by the drywall installer, who will be smoothing out the walls (especially over there on the right) and getting everything ready for the tile installers to do their magic.

The HVAC sub will be here next Monday to re-route ductwork and cut new openings for the vents, so the tile is on hold until then. The rest of this week will focus on the walls.

I feel like we’ve turned the corner – all the bad/rotten/duplicative stuff has been excised, and we’re ready to start layering on new finishes.

We have successfully survived one week of kitchen renovation!

The first question most people have is, “How are you managing to feed a family of six without a kitchen??” And the answer is: the guest house, where my mom lived, has a small-but-full kitchen. It even has a dishwasher, praise the Lord. If you recall, we all lived in the guest house for the first six weeks after we bought the house (while the electrical and plumbing work was going on), so the kitchen and I are old friends.

When I last updated, we were just getting ready to address the floor situation.

Here’s where we were at the end of last Wednesday:

They pulled back the layer of slate-look vinyl tile, the black-and-white checkerboard vinyl tile, and discovered a layer of old-school linoleum that was actually kind of awesome. It’s a buttery yellow with copper flecks.

I’d secretly hoped to uncover magically-preserved hardwoods under all those floors,  but ALAS. The hardwoods were in terrible shape and riddled with nail holes, and the subfloor under them was rotten in several spots. All of it had to come out.

Once the floors were out, we made some, er, upsetting discoveries.

We found two other places where load-bearing walls are resting on nothing at all. I’m pretty sure this was a consequence of moving the house, but it’s a little frustrating. Several concrete blocks and two house jacks later, we’ve got sufficient support under all the walls.

3. When they cut the house in half to move it in 1960, someone took a chainsaw to the joists under the kitchen floor, short of the beam that held them up. So the joists were just hanging, which was also causing a lot of problems with the floor.

We always knew the floor was going to be the most vexing part. We are hopeful that we will be able to stick with Plan A, which is a herringbone brick floor like this:

If we are unable to level the floors, we will go with Plan B, which is hardwoods stained to match the floors in the rest of the house. This is not a bad Plan B! Either choice will look lovely.

No matter what flooring goes on top, I will sleep better knowing that the structural bits of the floor are in proper working order.

Here’s a shot from Tuesday morning:

Our house turns 90 this year, and we decided to get the old girl something really nice for her birthday – a new kitchen. Today was Demo Day.

Y’all, it was just as much fun as it looks on HGTV. Squee!

This is how our kitchen looked at 8:00 this morning:

For those still working out the birthday math above, the house was built in 1928 and the kitchen has gone through several remodels since that time. Lucky for us, one of the previous owners lives right next door, and he provided some very helpful information. He did a kitchen remodel some time during his tenure, between 1995 and 2009, and could tell us what was there before, and what had been done since. He said he thought some of the kitchen cabinets were original to the 1928 house.

Our primary goals in this remodel are:

Here’s how the kitchen looks tonight:

The first thing I noticed is that it appears the kitchen was, once upon a time, painted insane asylum green. The fact that the walls behind the cabinets are painted leads me to wonder if the original kitchen was unfitted. Wall-to-wall cabinetry didn’t come into use until the 1950s – older kitchens would have had furniture pieces, such as Hoosier cabinets, freestanding sinks, and worktables.

The second thing I noticed is that a range was clearly located in the center of the back wall, as the guts of a ventilation system were hiding behind the cabinet there. Thank you, distant prior owner, for validating my appliance placement opinion!

I felt like I was on CSI: My Kitchen all day today. See that weird doorway on the left? It was completely covered by cabinets, but it leads to a closet under the stairs. There’s an old disconnected water heater in the closet, and we’ve been scratching our heads since we moved in, because the water heater won’t fit through the other entry door to the closet. We couldn’t figure out how anyone got it in there, much less how we were going to get it out. But now we have an answer!

We also discovered at least three layers of flooring – the original hardwood, a black-and-white checkerboard linoleum, and the slate-look vinyl tile on top. Awesome!

So what’s the plan?

The layout of the kitchen will end up looking something like this:

Finish-wise, we’re hoping for something that feels similar to this:

We’ll see how it goes! We’ve already had a lucky break AND a setback today. The lucky break is that the soffit was mercifully empty and we won’t have to re-route wiring. The setback is that we can’t remove any of the partial wall that was next to the wall oven, so the peninsula will have less barstool space than originally planned. But I can roll with it.

Tomorrow we tear up the floors to see what’s causing them to be so very jacked up. Very exciting times ahead!

Every year on January 1, I re-read last year’s (foolishly optimistic) predictions for the year ahead. Last January we resolved to focus on the decorative side of the house, and do all the “normal” resolution things, like reading more non-fiction.

I did not know then that simply surviving the year would be an accomplishment in and of itself.

We did manage to paint all the downstairs rooms in the house, but the upstairs bedrooms are still covered in drywall patches. We also planned a major kitchen renovation, which will kick off next week. And we bought a new couch. Heeeeeey.

I read eight non-fiction books over the course of the year. Quite honestly, I needed the escape of fiction. I was learning pah-lenty in my real life.

Otherwise, we survived. We kept the kids fed and schooled and loved. We paid our bills and changed the oil in the cars and ran the dishwasher.

And we managed my mom’s decline and death. We planned her burial and her memorial service. I acted as her personal representative and filled out a mountain of paperwork.

And I wrote a book.

All in all, it was a year I am proud of.

I’ve started going through the contents of mom’s storage unit, and on Saturday I pulled out a box filled with notes and cards. Some of them were from mom’s initial hospitalization in 2015, but most of them were the cards she received when my father died in 2003.

There were a LOT of cards.

I read every one of them, since mom didn’t share them with me when dad died (even though some of them were addressed to me, AHEM). I couldn’t just put them in the recycling bin without looking.

I did find some treasures – funny stories and details I hadn’t known – but what kept coming up, over and over, were descriptions of my father that included the word “joyful.” His joyful smile, his joyful laugh, his joyful spirit. Many people remarked on the fact that he was frequently the last person to leave the sanctuary after church because he just loved visiting with everyone. And dozens of people – dozens – said some variation of the following: “every time I talked to him, I left the conversation feeling better about myself and better about everything.”

Jason and I made a list of New Year’s Resolutions a few weeks ago, but reading all those cards caused me to toss my list right out the window.

This year, I just want to be more joyful.

My dad was able to find joy wherever he was, and whoever he was with. He made it look easy.

There is much to be joyful about. I just need to do the hard work of choosing it.