Five years ago today, our house was struck by lightning and burned.

It is an event which has come to shape my worldview in a lot of ways. Experiencing such a trauma taught me a lot about myself, about my marriage, and about my neighbors. I learned so many positive lessons from the fire, the most important of which were about kindness and generosity.

I wouldn’t go so far as to say it was a great experience, though.

I can still tell the difference between the smell of a wood fire and the smell of a house fire. House fires smell particularly sharp, an undertone of hot metal and burning chemicals.

It feels a little like we will be abandoning this house when we move. We’ve been through a lot together, this house and the Taylors.

Ultimately, this house is just a pile of bricks and lumber like any other. The memories we’ve made here can’t be packed up in boxes, but they will come with us.

A Bushel and a Peck

Saturday we ventured into south Georgia for an agricultural field trip.

First, we picked blueberries at a friend’s grandmother’s house. Hazel LOVES blueberries. She ate them off the bushes, after several reminders to only eat the blue ones. Jason would dump a handful in his bucket, and she’d scoop them up and shove them all in her mouth. Despite her best efforts, we still managed to pick nine pounds of blueberries.

Nine. Pounds. Of. Blueberries. That’s a LOT of fruit.

We then headed to a u-pick tomato farm. Picking my own produce always reminds me of this delightful post from Stuff White People Like, so it was with a mixture of chagrin and amusement that I headed off down the rows with a five-gallon bucket.

The farm had several varieties of tomatoes, and we got a mix of beefsteak and Roma. I had visions of pasta sauce, BLTs, and caprese salad.

Do you know how many tomatoes a 5-gallon bucket holds? Answer: A ridiculous amount of tomatoes.

It was not even lunchtime, and we had gathered an absurd amount of fruit. By the end of the day, we added six pounds of zucchini, several squash, and one cucumber to our haul. Our friends were probably laughing at us. Okay, definitely laughing at us.

Jason also tried to pet the cows on the farm. It went about as well as you’d expect.

We returned to suburbia and got to work putting up our bounty.

First up, I began freezing the blueberries. After a quick wash, I spread them out on baking sheets in two-pound batches and stuck them in the freezer. After an hour or two, they went into (labeled!) Ziploc bags for long-term freezer storage. 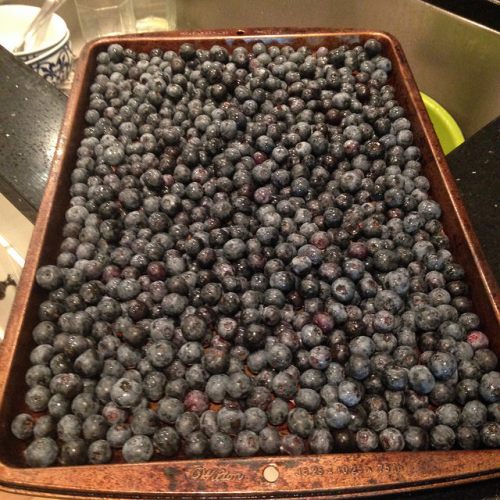 After that, I shredded two of the zucchinis and froze them. I put two cups of shredded zucchini in a sandwich bag, flattened it, and put five such sandwich bags in a gallon freezer bag.

Then I turned my attention to the tomatoes. By this time they had exited their bucket and were plotting a bloodless coup.

I took two pounds of the Romas, halved them, scooped the seeds, and put them in the oven to dry. They spent most of the day at 200 degrees.

For dinner, we had a tomato tart.

After dinner Hazel experienced what can only be described as a Blueberry Blowout.

The next day, I used fifteen pounds to make an epic batch of pasta sauce, and oven-dried another two pounds of Roma tomatoes.

I cored, scored, and blanched the sauce tomatoes, then put them in a ginormous stock pot with aromatics (sauteed onions, garlic, oregano, Italian seasoning, wine, and bay leaves) and let them simmer. 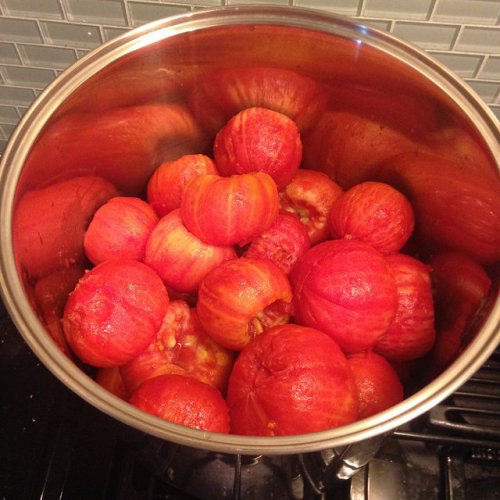 After a few hours, they were starting to break down.

I used my immersion blender to smooth things out a bit.

After that it was a matter of reducing the sauce to the right consistency, letting it cool, and portioning it out into gallon freezer bags. We got six quarts of sauce.

…..and that took care of about half of the tomatoes. We’ve been eating the rest as fast as we can, but I have a sneaking suspicion I have Tribble tomatoes in my kitchen. Every time I walk through, they’ve multiplied.

So if you see us looking a little pink around the gills, it’s not sunburn – it’s tomato fever.

We love our house, and we have loved living in our house. I am not a believer in “forever homes,” because life is just too unpredictable and I am too restless. This was the right house at the right time for our family. But now we’ve been presented with an opportunity to move to a house that needs our creative energy (and our dollars, natch).

We bought this home almost exactly five years ago, on May 27, 2011. If you know me at all, you know that on June 30, 2011, one month after our closing, the house was struck by lightning and suffered massive fire/water damage. Jason likes to say that his “honey do” list went from 1,000 items to 5, because after that almost everything in the house was brand-new.

Despite the total renovation, we have continued to make changes and improvements – well, we see them as improvements. I thought it would be fun (for me) to look back to where we started, and compare it to the house we’re leaving behind.

We haven’t changed much about the exterior – but we did add a Bevolo gas lamp to the front porch. It remains one of my favorite things we did during the remodel.

We also chose a lighter roof color, to reflect more sunlight, and replaced the windows with energy-efficient models.

The other big change we made to the home’s exterior was replacing the flat roof over the sunroom with a gable roof, which allowed the space to be properly heated and cooled. 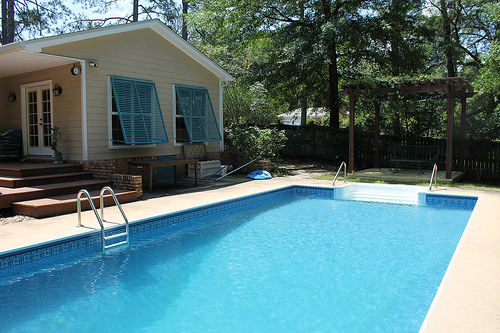 The picture of the pool reminds me – I need to soak up as much pool time as I can before we move!