True story: Jason doesn’t like Halloween. I adore Halloween. He doesn’t think it’s a holiday. I don’t either! But I think it’s a lot of fun. And I don’t hear him complaining as he’s crinkling his way through a bag of leftover candy. AHEM.

We agree to disagree on Halloween.

Last year, we hosted a big Halloween party. This year, we were too busy.

Friday night was Trunk or Treat at our church. A group of young adult members wanted to put together a series of Seuss-themed trunks. We had the Lorax, the Grinch who Stole Christmas, the Cat in the Hat, the Sneeches, and Oh, the Places You’ll Go! Hazel was roped into duty as the fish in a bowl from the Cat in the Hat. 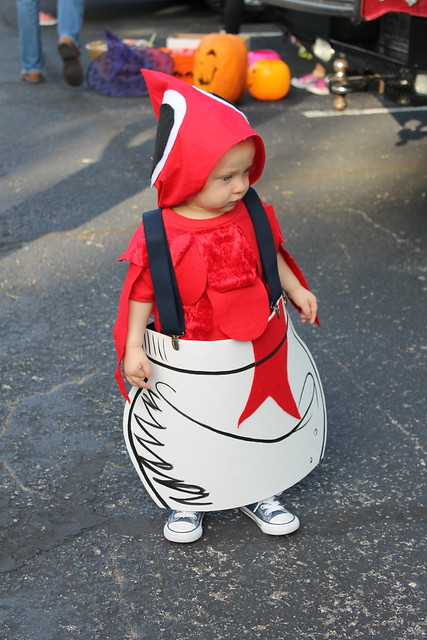 I made her costume using a red t-shirt, red remnant fabric (felt and velvet), a red bandanna for the hood with black and white felt for the eyes, and a posterboard on which I painted the fish bowl. Total cost: $8.87 and about two hours of time.

Saturday was Halloween. Jason and Tyler went to the FSU game while Hazel and I made chili and pumpkin cream pies for a party that night. 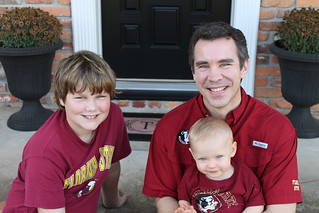 Hazel wore a hand-me-down Tinkerbell costume, which was perfect because it was 85 degrees outside. 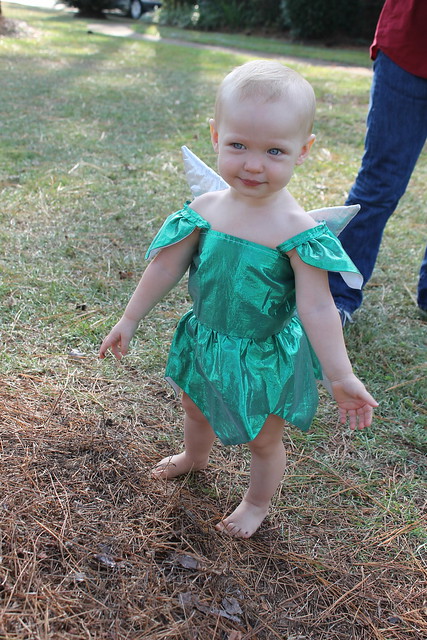 Despite my repeated prompting, Tyler failed to come up with any clever costume ideas, so he recycled a mask from last year and that was that.

I’m glad we had a breather this year, but I hope to put a bit more effort into Halloween next year.