This summer, I asked Tyler what he wanted for his 12th birthday. To my mild horror, he replied that he wanted “to travel.” Specifically, he said he would very much like to go to New York.

It was a lovely, though expensive, answer.

He went so far as to dig up an essay he’d written in third grade, detailing his dream trip to New York. 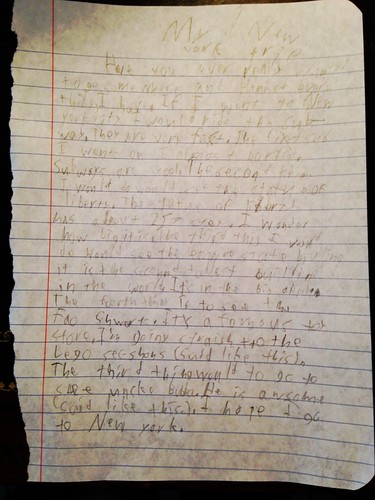 (Translation: Have you ever really wanted to go somewhere and planned everything, I have. If I went to new York City I would ride the subway. They are very fast. The first sub I went on I almost barfed. Subways are cool. The second thing I would do would see the Statue of Liberty. The Statue of Liberty has about 257 steps. I wonder how big it is. The third thing I would do would see the empire state building it is the second tallest building in the world. It’s in the big apple. The fourth thing is to see the FAO Shwarts. It’s a famous toy store. I’m going straight to the Lego sec-shons (said like this). The third thing would to go to see Uncle Bubba. He is awsome (said like this.). I hope I go to New York.)

From this essay and conversations with the boy, I made a short list of things we had to do:

I needed to get creative. I found cheap plane tickets through Jet Blue, and my friend Jamie graciously agreed to put us up in her apartment. Tyler’s birthday was August 1, but New York in the late summer is almost as oppressive as Florida, but with far less air-conditioning and far shorter tempers. I booked tickets for late October, and then got to work planning.

After an absurd amount of research, I decided to get City Passes for each of us. This was a good decision. I definitely feel that we saved money on tickets, and there was never any issue using them.

We flew out of Jacksonville on October 21, arriving on Jamie’s doorstep near midnight after a flight delay and a long Super Shuttle trip (which I prefer to think of as a low-cost tour of various midtown hotels).

Thursday morning we hit the ground running. First up: a ride on the real-live New York City subway. It wasn’t even 9:00 a.m., and we’d accomplished 1/4 of our goals! Winning!

I decided we should start with the 9/11 Memorial and Museum. I was just beginning my senior year of college when 9/11 happened, and it very much shaped the end of my college experience. The last time I was in New York, the site was bare, and I was eager to see what had been done.

The museum was very well-done. I was surprised by how much of it focused on the building itself – the engineering that made the buildings possible, and the forces that brought them down. My guess is that because the memory is still so fresh, people are not as willing to part with the personal artifacts that might one day find their home in the museum. That said, the dozen or so Kleenex dispensers scattered around the hall were put to good use.

After the tour, we headed to City Hall and Chinatown for some lunch at Tasty Hand-Pulled Noodles, which serves (surprise!) tasty hand-pulled noodles in a space the size of my family room. I got pan-fried noodles, Tyler got noodle soup with pork dumplings. Both were delicious.

Fueled by carbs, we were ready to tackle another list item: The Statue of Liberty. We made our way to Battery Park and caught the ferry to see a real big lady. It was around this time that I began regretting my choice of adorable gray Converses for the weekend. My pinkie toes had already developed large blisters from sock-seam chafing. Needless to say, I was psyched to sit on a boat for a few minutes. 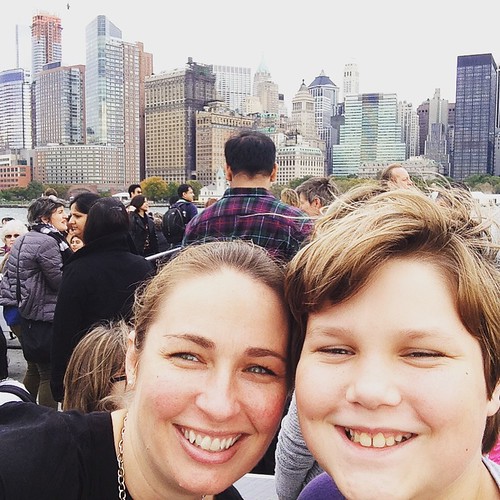 Tyler and I agree: the Statue of Liberty is surprisingly impressive. I mean, everyone knows what she looks like, but to see her up close is just awesome, in the old sense of the word. Awe-inspiring. We took the free audio tour, which I recommend. I wish we’d had more time to sit by the water and gaze at the skyline, but they were closing up shop by that point.

Back in Battery Park, we discussed our next moves. We were scheduled to meet a friend in Brooklyn for dinner at 6:30, and she’d suggested walking across the Brooklyn Bridge as an appetizer, so we started strolling up the east side of Manhattan. As the Brooklyn Bridge became clearer, I realized that the pedestrian walkway is above the roadway – and I am moderately acrophobic. I wasn’t going to say anything, but Tyler had a mild freak-out about the height as well, so we nixed that idea in favor of taking a cab across the bridge into Brooklyn. 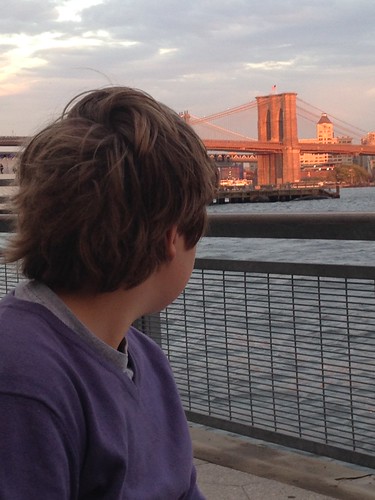 Dinner that night was at Pok Pok, a very nice Thai place, followed by ice cream at the Farmacy, which was straight up the most Brooklyn thing I have ever seen. Ironic mustaches and floral rompers for days, y’all.

Friday morning we headed to the American Museum of Natural History. But first – brunch at Shake Shack. Delicious. I had a caramel shake and fries, Tyler had a chocolate shake and a burger. Don’t judge. 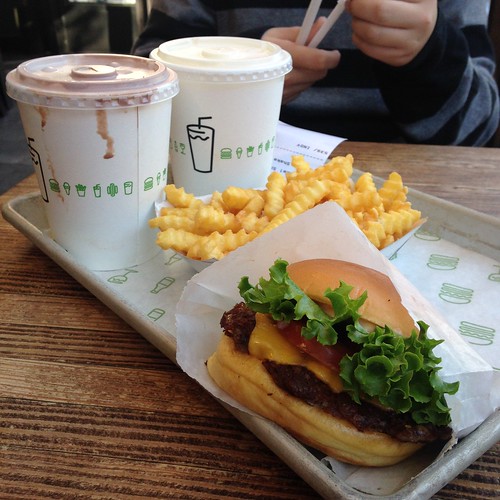 The natural history museum is a heck of a thing. It has four floors of dioramas, skeletons, and other artifacts. We saw probably 75% of the exhibits on display, and that was exhausting. I developed a new appreciation for taxidermists. 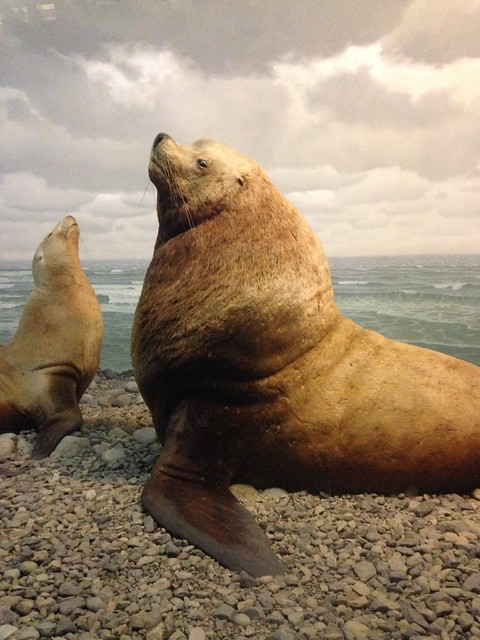 After many hours, we were museum-ed out.  Grabbing street food (falafel for me, gyro for Tyler) we wandered across the street into Central Park and rested our brains – and our feet. Tyler spotted a huge rat and tried to pet the pigeons. Oh, Tyler.

Our next destination was Rockefeller Center, home of Tyler’s new favorite place: THE LEGO STORE.

Several dollars later, we met Jamie at The Kunjip in Koreatown for some authentic Korean fare.  Surprising everyone, Tyler did not sear his own flesh on the hot stone pot in which the food was served. Way to go, Tyler.

It’s funny – I’ve been making bibimbap for years, having never tried the real thing. I was pretty close!

Jamie took one for the team and walked us through Times Square. Quickly. Zoom! 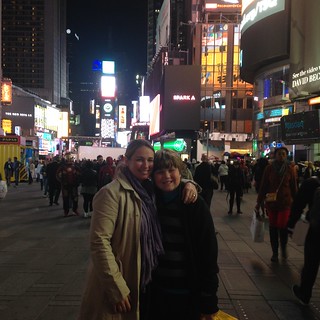 Friday night we saw Les Miserables, which Tyler thought was fantastic. It was wonderful to watch him enjoy something so far outside his normal experience. Now he wants to watch the movie for comparison’s sake (and to hear the songs again).

Saturday we stayed in Jamie’s neighborhood. We had brunch at an Irish place, then met up with another Amherst alum and his family at a local playground. They have two babies, so Tyler was thrilled. He loves kids, especially babies. We ended up spending most of the afternoon with them, which was delightful. Then we walked into Fort Tryon Park before an early dinner at a Salvadorian restaurant.

And then it was time to head back to the airport, which ended up being an adventure unto itself. Part of the A line was closed, so we had to divert to the J train and take the AirTrain in from a far north station. It ended up taking almost 2 hours to get to the airport. Then our flight was delayed – for four hours. We landed in Jacksonville at 2:30 a.m.

To his great credit, Tyler never complained. He was a fantastic little companion on this trip, and I will be happy to travel with him any time.

When I got the dirty clothes out of his bag, I found four pairs of clean, folded socks. That means he wore the same socks for four days.

Overall, the trip was fantastic. The weather was beautiful, the crowds were minimal, and the food was delicious.

My takeaways from the trip are obvious: wear the most comfortable shoes you own, pack a family-size bottle of Advil PM, and budget extra travel and wait time for everything. You’re all set!