A New Year’s Resolution I Can Get Behind

I resisted making a New Year’s resolution this year. I am tired, tiiiiiired, of vowing to lose weight, read more books, and be a better person every single year. It’s exhausting, and only leads to failure, which makes me want to drink.

And then it hit me. Drinks!

My New Year’s resolution for 2015 is simple: every month, I will try a new cocktail and learn to make it at home.

January’s cocktail is the Sidecar.

Wikipedia can fill you in, but here’s the short history of the sidecar: It was invented in Paris, or maybe London, around the end of World War I. The basic idea recipe is equal parts cognac/brandy, Cointreau/triple sec, and lemon juice. This formulation is known as the “French school,” while the “English school” involves two parts cognac to one part Cointreau and one part lemon juice.

Many hip drinking establishments (and Pinterest recipes) insist upon a sugared glass rim. Some suggest garnishing with a cherry – not the bright red ice-cream-sundae maraschinos, but darker, cocktail-worthy cherries. You know, for grownups.

We gathered up our ingredients: a higher-end brandy, triple sec, and fresh-squeezed lemon juice. Jason threw them in the cocktail shaker with ice, and strained them into glasses. A dark cherry served as a minimalist garnish. This was good for Jason, but it was a bit acidic for me. I wanted the effect of a sugared rim without the work, so I added about a teaspoon of simple syrup to my drink. Perfection.

I think of a sidecar as a winter margarita – it’s citrusy without being summery. The brandy adds warmth and depth. This drink goes down very easy, so be careful.

Yeah, this is way better than hitting the gym.

Chapter 8: In which our tiny heroine is suddenly mobile.

Hazel finally transitioned out of Lump Phase this month. Over Christmas break, she mastered getting up on all fours and rocking back and forth. After that came the frustrating I-want-to-go-forwards-but-I’m-only-moving-backwards phase, followed at long last by legitimate crawling. She gets faster every day, especially when her target is something verboten – the cable modem with its flickering lights, the delicious edge of the hearth, the cat.

Her sudden mobility has come as quite a shock to the pets, who were accustomed to a certain “safe distance” beyond which the baby could not grab their ears, whiskers, or flanks. Those days are over. Ron the cat will toy with Hazel, allowing her to get within inches before moving away. We are teaching her to be gentle with the animals, but that too is a process.

In addition to crawling, Hazel is starting to pull up to standing. She particularly likes standing in her crib (and gnawing on the rails with her SIX teeth). Woe to the person who removes her from her crib when she’s mid-gnaw.

We had a bit of a setback this month in the feeding department. We introduced Hazel to oat cereal at six months, which went okay. But when we tried to add purees to her food repertoire, she refused them. Eventually, she stopped eating the oat cereal as well. Mealtimes became frustrating, as Hazel wouldn’t eat and I hate wasting food. We both shed many tears over the process. This is also the child who never learned to drink from a bottle, so my life has been scheduled around her feedings every day for the last eight months with no break. It was overwhelming. Finally I called Hazel’s pediatrician and had a great conversation with the nurse. We’re calling a do-over on food – starting back from square one, oat cereal. I’m also supposed to make sure that Hazel is truly hungry before we try to feed her, so I’ve been spacing out her feedings from every 2-3 hours to every 4-5 hours. I am happy to report that the changes seem to be working – Hazel has eaten a full serving of oat cereal every day since Thursday. Fingers crossed!

Hazel now understands object permanence, the idea that when an object is out of view it still exists. This makes it much harder to “hide” things she shouldn’t play with. We are trying to dissuade her from using That Horrid Piercing Wail to get her way.

Thankfully, she continues to be an overall delightful child, bright and inquisitive and generally quiet. Hazel and I are both looking forward to warmer weather and more time outside!

Filed under Kate the Chicken

1. A Game of Thrones and A Clash of Kings (in progress), George R. R. Martin. I bought Game of Thrones at Chamblin’s a long time ago and am finally getting around to reading it. I find it very enjoyable, with some minor annoyances. On the one hand, it occasionally feels derivative and borrowed – especially from Lewis and Tolkien, with a dash of Stephen King’s chill. For example, the Dothraki remind me forcefully of the Calormenes in Lewis’ A Horse and His Boy. On the other hand, I love the Narnia series and the Ring trilogy, so it’s no problem for me to read stories from a land that feels familiar. When I finished the first book, I immediately wanted to get the second one – but I didn’t want it enough to pay for it. The library had a kindle version I’m reading now.

2. A Discovery of Witches, Deborah Harkness. My reading tastes run to the lighter side, but this was alllllmost too light for me. I’ve heard it described as “Twilight for Grownups,” and I agree with that. It was a quick read, predictable yet entertaining. I borrowed it from the library, and will probably do the same with the sequels (because, naturally, it’s a trilogy).

3. The Whole Damn Harry Potter Series, J.K. Rowling. I re-read these books in preparation for our trip to Universal Studios. I was once again amazed by how rich a world Rowling has created. We also re-watched all the movies, which are great, but they can’t hold a candle to the books. There’s just so much MORE in the books. More story, more characters, more depth and breadth. I don’t re-read many books, but I am already looking forward to reading these again with Hazel.

4. The Cuckoo’s Calling, Robert Galbraith. This book was chosen for one of the book clubs to which I belong. Robert Galbraith is a pen name for J.K. Rowling – it was a Very Rowling December. This book is definitely for adults, as it deals with a model’s suicide-that-may-be-murder. It’s almost as though, having secured a place for her “children’s” books alongside C.S. Lewis, she is elbowing in for her berth among Britain’s great mystery writers like Agatha Christie, P.D. James, and Arthur Conan Doyle. She’s succeeding, too.

5. Every Soul a Star, Wendy Mass & Stargirl, Jerry Spinelli. Tyler and I read these for his school’s SPUR (students & parents unplugged & reading) group. I enjoyed the former more than the latter, but both were good choices for the middle-school-age reader. Because they are for younger people, the message can be a bit heavy-handed.

This year, we did something very different for Christmas.

We didn’t buy any presents for our kids.

Instead of spending time and money at the mall or on Amazon, we surprised the children with a 4-night, 3-day vacation to Universal Studios. I found an sweet package deal for an amazing Harry Potter-themed adventure.

All three of the older kids have watched the Harry Potter movies and read the books, and love the stories. (Let’s face it, Jason and I are huge fans, too.) We knew that this vacation would be a perfect gift for them. It was unbelievably hard to keep the trip a secret, but we managed to wait until they returned to us at noon on December 28. We sat them down and handed each of them an envelope. Inside was a letter (bearing the Hogwarts crest) explaining the trip, a packing list, some spending money, and maps of the parks. They FREAKED. Hollyn cried!

We left that afternoon and arrived in Orlando by dinnertime. Our package included early admission to the parks, so we hit the hay. 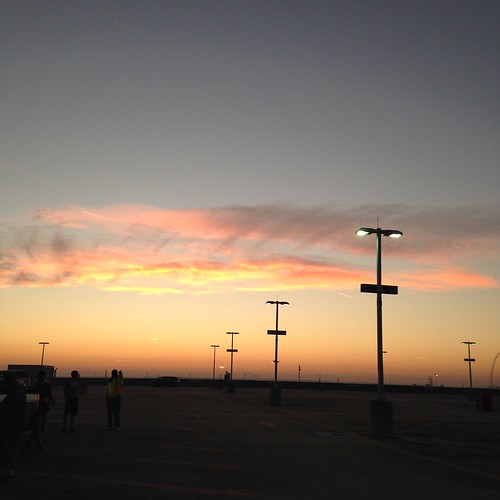 Monday morning we entered the gates just after 7:00 a.m. 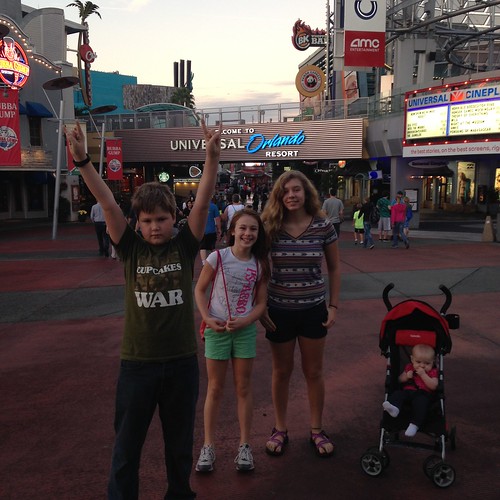 We made a beeline for Diagon Alley. 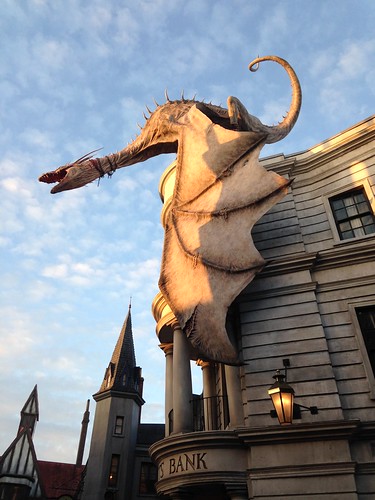 After breakfast at the Leaky Cauldron, we spent the whole day exploring Diagon Alley, riding the Hogwarts Express, and wandering around Hogsmeade. In short, we TOTALLY GEEKED OUT.

Tuesday we went back to Universal Studios, where we explored the rest of the park. We started later in the day and went back to Diagon Alley at night, which was a different (but equally cool) experience. Wednesday we devoted to Islands of Adventure, and on Thursday we came home.

The trip was outstanding. The kids are old enough to spend a whole day on their feet without losing their minds. They loved the Harry Potter worlds, and rode a ton of rides. We loved being able to give them an experience, rather than things that they will outgrow and cast aside.

Hazel was an angel the entire trip. She was happy to go wherever we went, as usual. Like her big brother, she’s a delightful traveling companion. 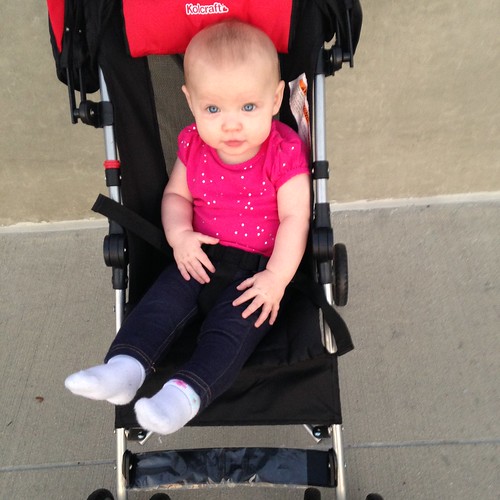 I can’t say enough good things about the Harry Potter attractions. They are truly immersive experiences, and it’s obvious that a lot of thought went into each detail. I am not the biggest fan of theme parks, but I was blown away. If you’re a fan of the books or the movies, it’s worth a visit.