These Boots are Made for Walking

It has been two weeks since Homer went to frolic in the big green meadow in the sky. And Fate gazed down upon us and deciding that we had a Boston-Terrier-shaped hole in our life. Then Fate gleefully rubbed her hands together. 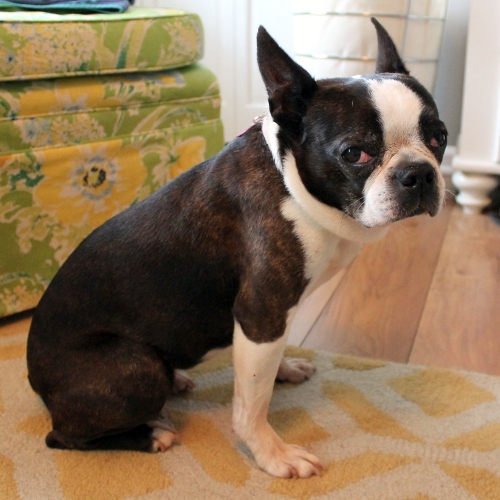 Boots belonged to a couple in North Carolina, and when the husband passed away, the wife was no longer able to care for Boots. The dog ended up with a friend of my mother’s on a temporary basis. My mother’s friend convinced Boots’ rightful owner that she would be happiest living with us. 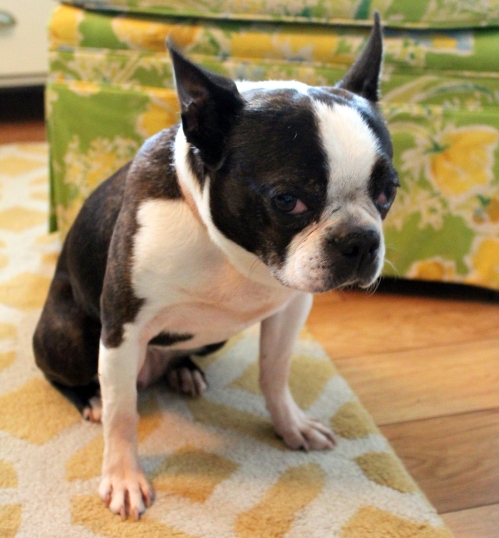 I hope she’s right! Boots is a brindle and white Boston, weighs about 12 lbs., and is very shy with people (but fine with animals).

She’s definitely warming up to me and Jason. She likes sitting with me on the couch, and is excited to see me when I come home from work. Boots is super-quiet, too – until she’s asleep! Her snoring is incredibly loud, considering it’s emanating from such a small body. 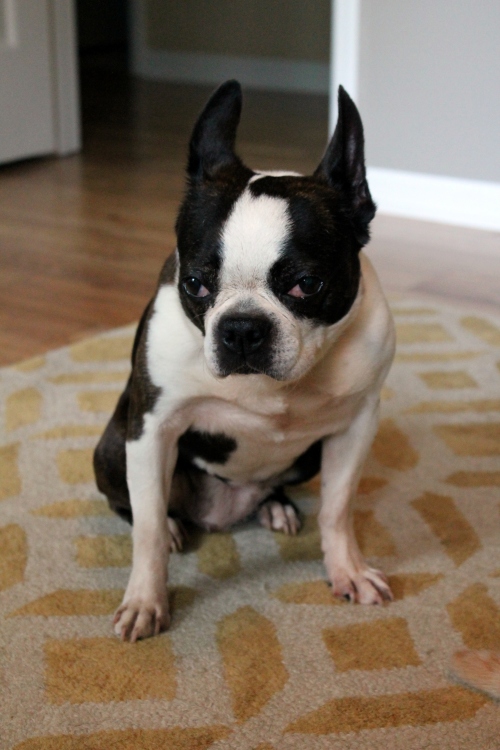 The Boston Terrier Rescue coordinator said she can be an honorary member of the BTRET, but only as a “happy tail” of a Boston who found a forever home.

Hellooooooo. Weather.com assures me that it will not get above 90 degrees this week, but weather.com frequently lies to me. And yet I keep coming back for more. Hm.

Despite having lived in Florida my entire life, I feel there is something cosmically wrong with wearing flip-flops or sandals at the end of September. Call me crazy (I’ve been called worse). The good news is, my co-workers keep my office set between “meat locker” and “walk-in cooler,” so it’s really never a good time for sandals. Yeay?

Have a lovely week.

That’s right, I’m giving up and just calling it “What I Wore (With My Maxi Skirt) Wednesday.”

It’s still hot here. Like, over 90 degrees every day hot. My soul thirsts for corduroys and suede, but cannot be satisfied. I take refuge in my maxi skirt.

Did I mention that my office is pretty casual?

And just to prove that I don’t wear this skirt every day (or even every week!), here’s what I wore on Monday:

Have a lovely week!

I’m sure that none of you sweat.

And I’m absolutely sure that none of you are hot sweaty messes like me.

But if, perchance, you are, and if – again, perchance – you own any white shirts, then you might be interested to know that this remedy for yellow underarm stains is amazing and works like a charm.

Now, please admire these lovely purple berries that have popped up all over my neighborhood. 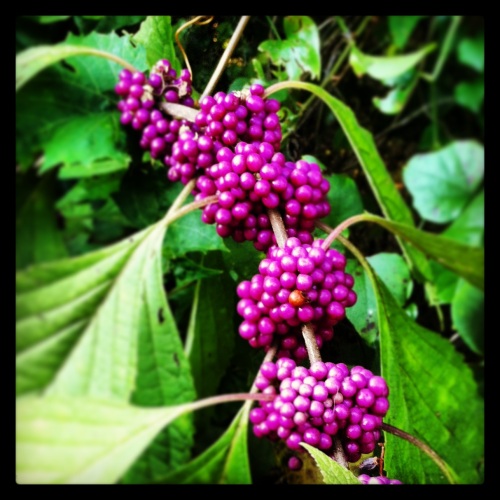 I have some bad news.

Monday evening, when I let Homer out, he was acting odd. He wasn’t interested in eating (very unusual for any member of my household!), and he acted like he was in pain. I checked his intact eye, which was very goopy but not red or swollen. Thinking it was hurting him, I cleaned it and gave him some pain medication, then called the rescue organization to get permission to take him to the vet Tuesday morning.

By Tuesday Homer’s condition had deteriorated significantly. He could barely stand outside to use the bathroom. Jason took him to the vet before 8:00 a.m. and dropped him off, as they had no appointments.

Because Homer is a foster dog, all decisions about his care are made by the rescue organization. But it was still quite a punch in the gut when the rescue lady contacted me around 10:00 a.m. and told me that they had decided to put Homer to sleep. His liver was not functioning, and he was fighting some sort of infection – maybe in his optic nerve. He was also 12, possibly 13 years old.

We picked him up from the vet and buried him in our yard.

I am so sad for him. He had a hard life before we picked him up at the shelter in December. I like to think we gave him some measure of comfort and peace at the end of his life, but I also feel like I should have noticed something, should have done more for him.

Homer, you were a good dog. I’m glad to have known you. 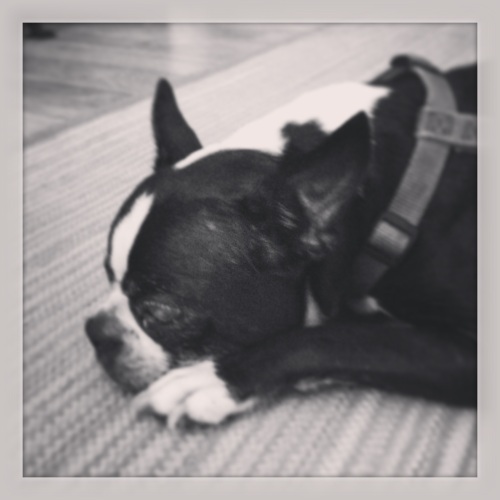 And behold, the pumpkin spice coffee was displayed prominently, and the people knew it was fall, and there was much rejoicing.

This has been a hard week. More on that tomorrow.

This outfit is so delightfully fall-ish, though, I can hardly stand it. I did not embrace orange (or pink, for that matter) until I was a grown-up person, but now I am like a moth to an orange flame.

I started simple – Ann Taylor trouser jeans (you can tell they’re old because they’re boot cut, heh) and a white v-neck tee. Then I added a chartreuse belt that came with a pair of Target pants once upon a time. Next came a paprika-colored suede blazer that I picked up at Goodwill on Labor day for $5.00. And lastly, a pretty infinity scarf I got this weekend in Northampton, MA, when I was visiting The Great White North for a friend’s wedding.

Oh, and sandals, because it’s still 90+ every day here.

Have a lovely week!