Things have not been easy with Hollyn recently – partly because she’s almost 13, and partly because of incidents like this one. But two things happened over the weekend that make me think things are getting better.

1. Jason’s ex-wife has a brother who is married with two children. The girls spotted the family at the grocery store on Saturday, and asked if they could go say hello, which of course was fine. I watched them cross the great divide of the produce section and begin chatting, and I wondered what would happen if I walked over and said hello myself, so I did.

And guess what? It was totally fine. The girls’ aunt was perfectly polite. I have no idea what she thinks of me, but even if she loathes me, she hid it for the sake of getting along in front of the children. THIS IS A REVELATION, and something that Jason’s ex cannot or will not do. The aunt introduced her daughter to Tyler, and they high-fived.

THEY HIGH-FIVED RIGHT THERE IN THE MIDDLE OF THE PRODUCE SECTION, IN FRONT OF GOD AND EVERYBODY.

I was completely floored and delighted.

2. On Sunday we dropped all three children off at summer camp for the week. They’ll have a whole week to be free from all their parents – phone calls are not allowed, and they have no access to e-mail. They get to be completely themselves. 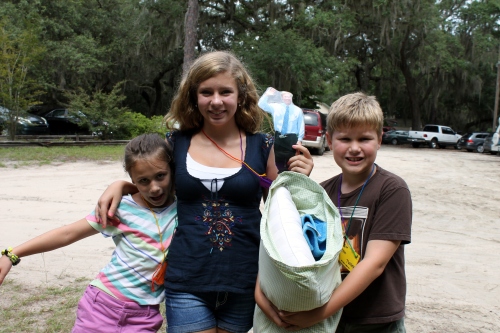 Tyler went to this camp last year and had a ball. His excitement at returning was infectious – I expected the girls to be nervous, but they were just as giddy as he was. Not a single tear was shed – by us or by them! – when we took them to their cabins.

We dropped Hollyn off last, as her cabin was away from the main camp. After making up her bed and showing her the bathrooms and common areas, we said it was time to go. She hugged both of us fiercely. “Love you guys!” she said.

She’s never said that, or anything like that, in reference to me. That is, until yesterday.

4 responses to “It’s the Small Things.”